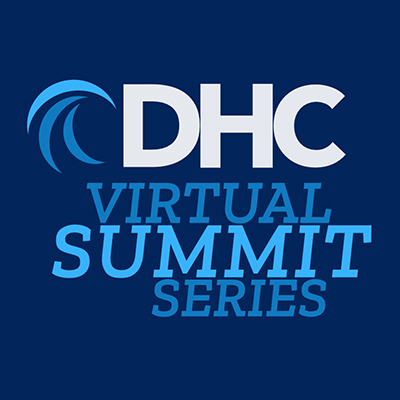 Over the course of one lunch break, I learned about five industry-related topics from eleven different experts. Each session— its own snackable content— both separate and yet thematic to one another. Although I did have a favorite… I must say I enjoyed every session and learned something from each of its experts. In an environment where people are understandably exhausted from virtual calls and events, DHC did a fantastic job making every second of this summit count. Continuing with that concept, let us dive right into the summit’s highlights!

Life Sciences, Patient Connectivity & Siloed Strategies kicked off the Summit. Panel members began by discussing how patients were being affected by social isolation and a lack of consistent care. Listeners were given some basic facts about autoimmune disease, and how the category is comprised of more than eighty diseases. One of which is dementia, whose patient population is greatly suffering from a lack of social and professional connection directly caused by the pandemic.

Melinda Decker of Mymee, remarked that the prevalence of autoimmune

disorders is growing and so the need to focus on finding treatments for them should follow suit. Peter Marchesini and Ed Cox, of Eversana, stated that digital therapeutics have a critical role to play in autoimmune care and other diseases that heavily and consistently rely on monitoring patients to successfully treat them. The group agreed that technologies like digital therapeutics have seen an accelerated rate of adoption because of the pandemic – possibly a bit of silver lining in what has otherwise been a devastating period of time.

Richard Watson, VP of  Marketing Intelligence at closerlook discussed Achieving Personalization at Scale in Pharma. He started by referencing the amiable scarecrow from “The Wizard of Oz” and his ambiguous directions to Dorothy for getting home— his view being that more than one path can take you where you want to go.

Next, he went over three lessons for personalization at scale. Ultimately, the point he made is that getting custom messages to large populations is possible, but it isn’t easy. The gist is to use various avenues to reach different audiences where and how they want to be reached.

The next panel dove into Coming Full Circle with COVID and Cancer, which currently affects over eleven million Americans. The panel, comprised of Heath Morlok and Tom Carr from Everyday Health Group and Tamara Cane from CMI, looked at how learnings from 2020 could impact 2021. The panel shared the top three concerns of cancer patients dealing with their illness during the pandemic. Number one is the physical impact it could have on their compromised immune systems. Second, the effect of social distancing on their mental health. Their third largest concern was the financial burden of paying for disease-related care during the pandemic. The panel reported that while oncologists were also largely concerned with getting patients’ physical access to care at the beginning of the pandemic, this concern waned as specialists started incorporating telemedicine.

The session concluded with Moderator Christine Franklin, of DHC posing the question— how can marketers respond to these learnings? Tamara Cane said it was by listening and showing empathy to patients and physicians alike and making it as easy as possible for them to learn about drugs and therapies.

Next in the queue, Richelle Horn of Wego Health discussed Patient Influencers and Telehealth – Understanding the Trends. The reoccurring theme— that COVID has sped up the adoption of technology—  especially true in the telehealth category. In fact, Horn described the progress in terms of “what would have taken ten years, has been seen in six months”. She also made the interesting point that while telehealth adoption numbers have significantly gone up, they aren’t nearly as high as the number of patients and practitioners saying they are willing to try telemedicine.

The last panel of the summit, How Marketers Are Meeting the Demands of an Evolving Patient Journey, was led by DHC’s Mark Bard, and experts Lisa Flaiz, of BMS, Nancy Phelan of Novartis, Tamara Cane of CMI, and our EVP and CPO Dan Wilmer.

First, Mark asked panelists what they see as the primary change to the patient journey in 2020? Nancy pointed out that it was important to start by looking at the years prior and stated that 30-40% of patients were not getting their prescribed treatments— clearly an area that could be improved. Dan agreed and stated “Beyond access, one of the biggest changes to patient journeys is in chronic patients whose health is declining because they are depressed. They are not taking care of themselves in terms of exercise and nutrition, because some of their simple joys – in-person visits with their grandchildren, the yoga or chair Zumba at the community center – have been temporarily taken away for safety’s sake. One indicator we see in our pharmacy retail network is that Frozen Foods and Alcoholic Beverages are way up YOY. We’re going to see an explosion of patients needing more care across the board, once this pandemic starts to lift.”

Next, the panel was asked which parts of the industry will see an increase in digital initiatives in 2021. Tamara responded that there should be an effort to increase patients’ knowledge of support that is already available to them and that this could be done through digital efforts. Dan said we will continue to see savvy marketers using popular digital tools like those used to target patients and providers safely and effectively in a HIPPA compliant manner. Lisa followed by saying that work could be done within existing promotional technology to further understand what patients are allowing us to tap into.

Near the end of the discussion, Mark brought the topic back to telehealth telling listeners that recent physician research showed that a primary concern they shared was that patients are having trouble with digital connectivity solutions such as telehealth and online messaging, and he asked if this is something pharma can help with?  Nancy asserted that the answer isn’t in digital alone, it is by taking a “People Plus” approach and using human and digital resources in combination to help patients. Dan and Tamara both pointed out that poor digital applications were simply increasing patient frustration instead of reducing the strain on an overburdened industry. Dan went on to explain how we are already seeing areas of strength and weakness in specific sects of healthcare. He brought attention to the fact that there are simply some health needs and procedures that are just easier to execute in person, while mental healthcare— on the other hand—  has made strides in treating people in their homes.

There isn’t a single industry or vocation (by this point in time) that hasn’t felt the devastation or at least the strain caused by the COVID-19 pandemic. Although we know it isn’t over, nor do we know when it will come to an end, we can take a little solace in the fact that it has pushed our industry and many others to work harder, faster, and in a more unified fashion.

This summit asked participating experts and those who attended to challenge themselves to think of the areas of our industry that need change and what we can do to move in the right direction. It has also served as a reminder that whether it’s marketing to patient sub-populations, educating patients and providers in a HIPPA compliant manner, or increasing the access of healthcare through telemedicine, we can perform better than anyone expected when we share a common goal.